Staff Sergeant Robert Sand smoking a pipe, while dressed for work as propellor specialist— complete with an apron for carrying his hand tools. Sand was born in Portland, Oregon, in 1914, and he worked as a salesclerk in Whatcom, Washington, before he joined the armed forces in 1942.

Photographs immortalize moments. At the American Air Museum, we work to safeguard the stories of brave American airmen—and one of our greatest assets is our photography collection.

Staff Sergeant Robert Sand of the 55th Fighter Group was responsible for maintenance and repair of fighter aircraft. He was a specialist in propeller mechanics, a crucial role where he was responsible for ensuring aircraft engines ran smoothly. Sand took personal accountability for the safe return of the aircraft he worked on, saying he “could not rest easy until every ship was off safely, and had returned safely.”

Sand was a keen artist and painted nose art on several famous fighter planes, recalling that “these quite crude efforts were done on very cold nights, with runny paints, usually not being completed until four or five a.m. and a full workday before or after.”

He was also an accomplished amateur photographer, and armed with his camera, he captured a photographic record of nearly 400 images of his life on base and time spent in Britain. 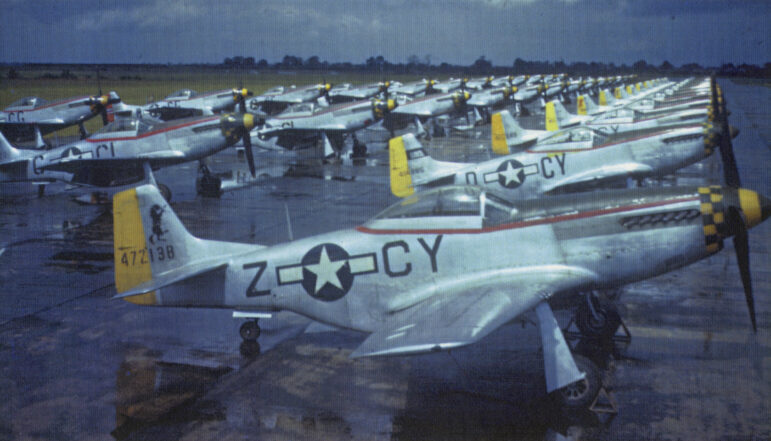 P-51 Mustangs of 55th Fighter Group lined up for review at Wormingford on June 12, 1945. Sand claimed that this was the first and last time the group formally lined up their aircraft for inspection, as the unit moved to Germany shortly after as part of the occupying forces. 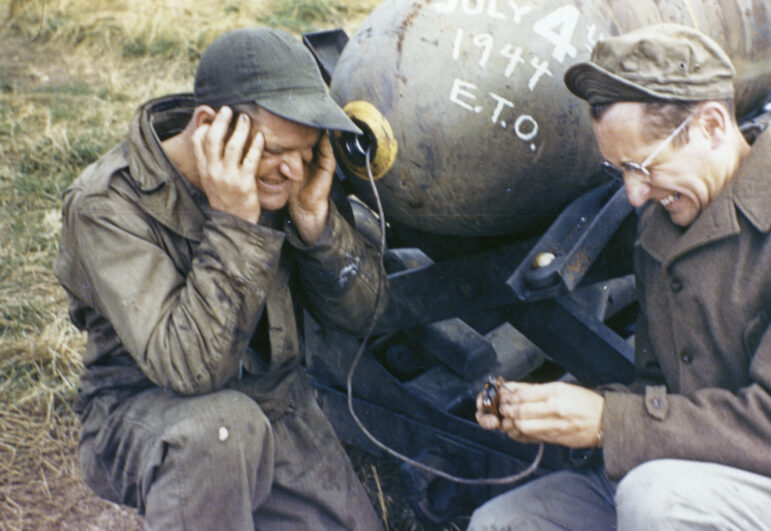 Sergeant Russell Butts (left) and Sand pretend to light the fuse on a 500-pound bomb on July 4, 1944. Ground personnel often sought distractions while waiting for their aircraft to come back, though this particular playful moment took place during the 55th Fighter Group’s Independence Day party. 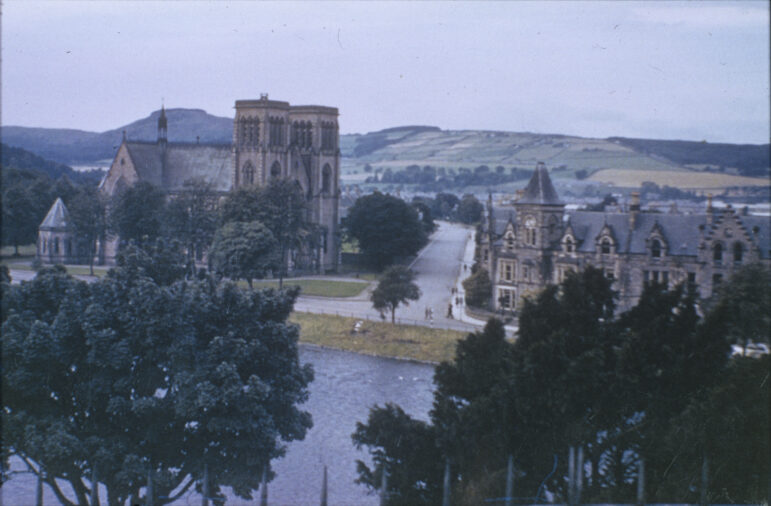 Scotland was a popular destination for American airmen to visit while on leave. Sand photographed Inverness Cathedral during a trip there in September 1944. He felt the highlands gave his photographs a “strange color.” 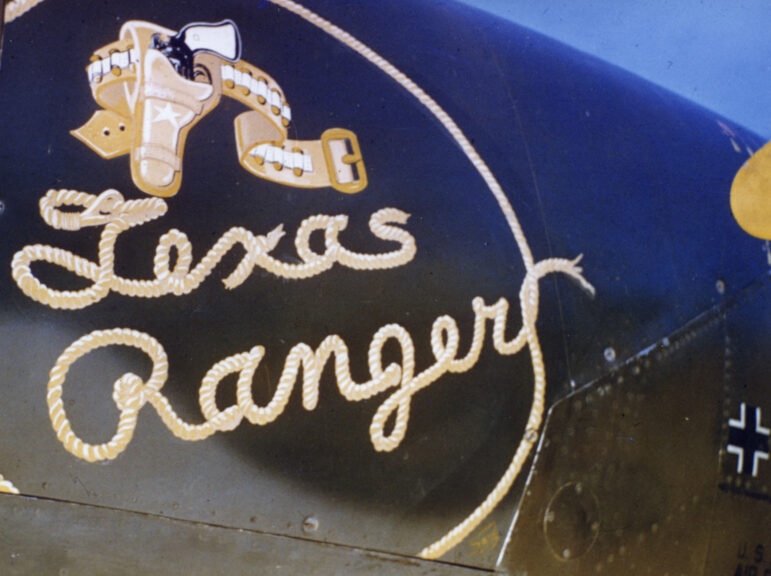 Sand painted the nose art of P-38 Lightning 42-67074 nicknamed “Texas Ranger” but admitted he hadn’t got round to finishing his work by the time he took this photograph, as the lasso is incomplete. The aircraft was assigned to Colonel Jack Jenkins. Jenkins was Commanding Officer of the 55th fighter Group, until he was shot down and captured in April 1944. 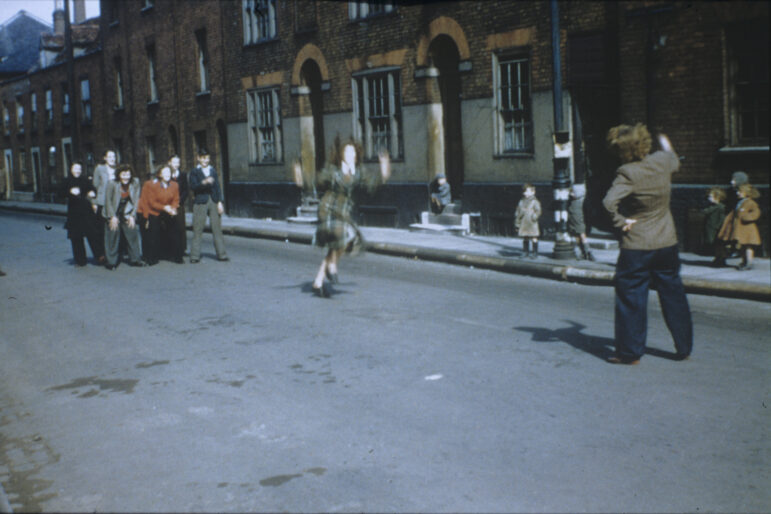 Girls dancing in the streets of Harwich in the Spring of 1945. Sand remembered: “I wished I could enter in the fun, but my rope skipping days were too far in the past. The kids didn’t acknowledge that I was there, even when I took this picture.” 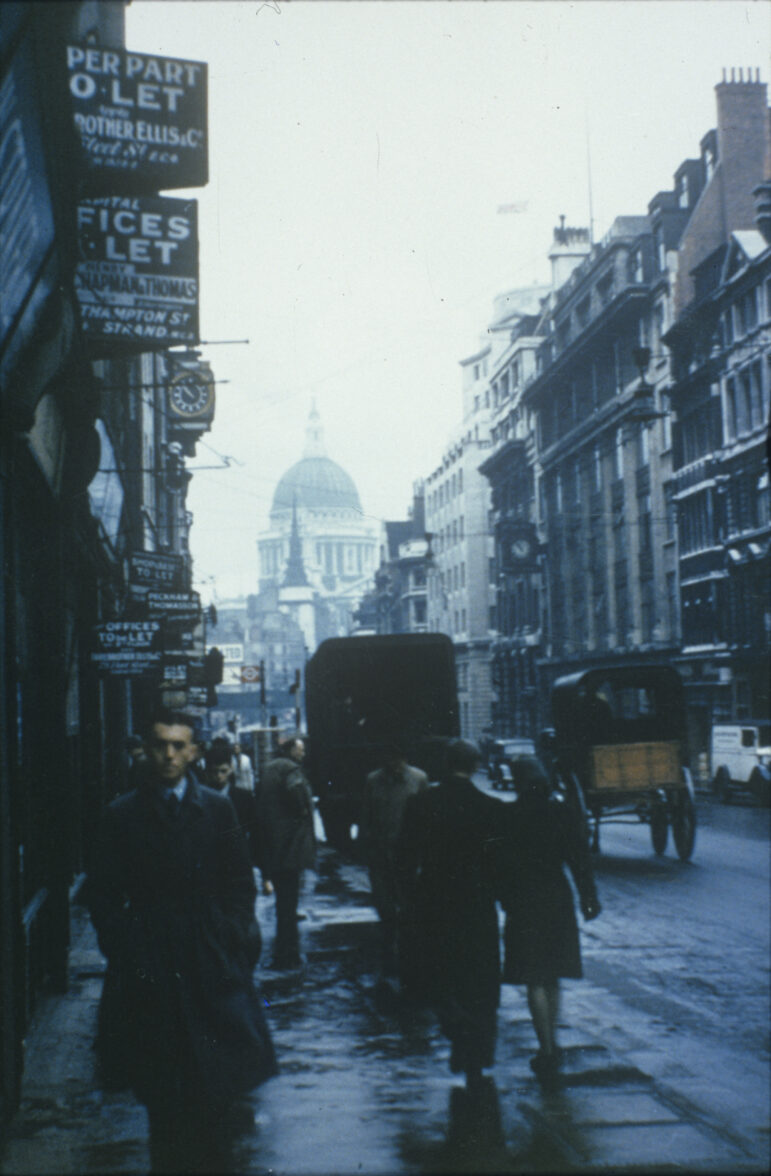 Most American airmen visited London during their service in Britain. Sand was among many Americans to visit sites which remain popular tourist destinations today, like St Paul’s Cathedral, which Sand photographed from Fleet Street on October 12, 1944. 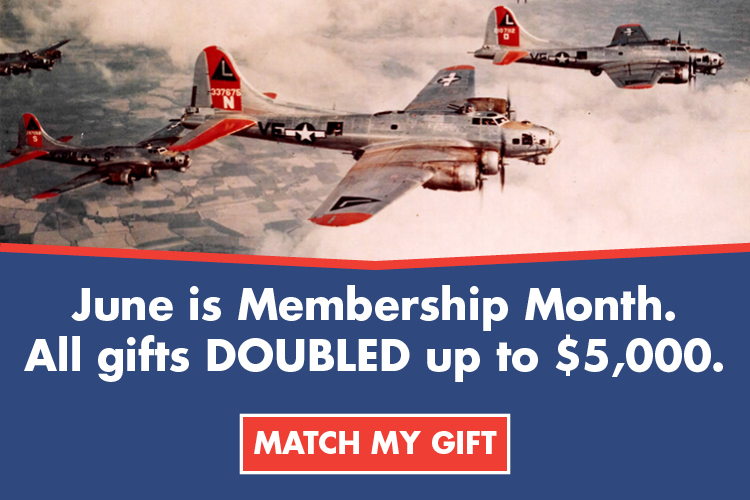