On November 11, 1918, Germany signed an armistice agreement with the Allies, ending the hostilities of World War I. The date was initially celebrated as “Armistice Day” in America until it was formally changed to “Veterans Day” by U.S. President Eisenhower in 1954.

Veterans Day is marked in the U.S. to recognize not only the brave servicemen of World War I but all men and women of the United States armed forces, past, present, and future. It’s also Remembrance Day in the U.K., commemorating British servicemen and women who lost their lives in military conflicts since World War I.

At the American Air Museum, these holidays are about more than just thanking veterans for their service. Veterans Day and Remembrance Day are a chance to reflect on the sacrifices and the stories of all members of the armed forces: those currently serving, spending countless time away from their children and families; those who served long ago; and, of course, those who made the ultimate sacrifice—giving their lives for the freedoms we enjoy today.

Part of the museum’s mission is to share and safeguard the story of veterans past and present. With our friends at Cambridge American Cemetery, we work together to honor the lives of brave men and women who took to the skies to defend liberty.

Cambridge American Cemetery was established as a temporary military cemetery on land donated by the University of Cambridge in 1943, outside the village of Madingley in Cambridgeshire. In 1956, it was dedicated as a permanent memorial to fallen American soldiers and is the only American World War II military cemetery in the British Isles.

The cemetery contains 3,812 headstones of American men and women who died during the Battle of the Atlantic, both in the strategic bombing campaign and on British soil. A further 5,127 names are commemorated on the Wall of Missing. A memorial chapel and visitor center also honor the dead, providing information about those commemorated and an understanding of the crucial campaign they fought in.

Arthur Brookes was a cemetery guide at the Cambridge American Cemetery until his retirement in 2015. He spent 13 years taking visitors around the cemetery. His story is on display at the American Air Museum.

When asked about the scale of the cemetery, Brookes said,

“Many people look at the cemetery and just see a sea of headstones: 3,812. And, in fact, there’s over 5,000 names on our Wall of Missing. Apart from our cemetery in the Philippines, that is the biggest list of American World War II missing anywhere in the world.”

Regarding the meaning of the headstones, Brookes explained,

At Cambridge American Cemetery, at the American Air Museum, and at plenty of other places around the world, we commemorate Veterans Day and Remembrance Day to recognize the people, the stories, and the sacrifice of veterans — yesterday, today, and tomorrow. 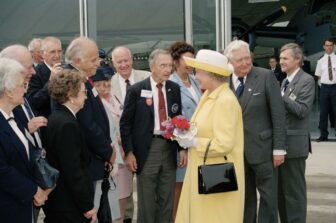