February marks Black History Month in the United States. African Americans like James Waddell and Evelyn Johnson are too often unsung heroes when the history of World War II is recounted. That is decidedly not the case here at the American Air Museum in Britain. With your help, we tell the stories of their service and commemorate the role they played in achieving victory during World War II.

Many Americans who helped make the Allies victorious in World War II had to combat prejudice and discrimination while serving in the U.S. military. Although the American Air Museum honors those largely unsung heroes every day of the year, Black History Month is a fitting time to spotlight them and ensure that their stories are heard.

James Waddell was eager to fight when the war broke out. Justifiably concerned that he would be discriminated against in the U.S. Army, which remained segregated during World War II, he explored the possibility of joining the Royal Canadian Air Force as a gunner. He eventually joined the American military after being told to wait by Canadians, and was posted to Britain as part of the U.S. Army Air Forces (USAAF) 847th Engineer Aviation Battalion.

In 1942, James was among the first Black troops to arrive in Britain. He and other Black construction engineers built airfields across England from which vast fleets of American bombers and fighters were launched as part of the Allied aerial campaign.

James and other African American servicemen faced persistent discrimination while carrying out the difficult, around-the-clock mission of building airfields. In an interview recorded before his passing, James recalled, “Eight of us from the outfit wanted to volunteer for frontline duty, [but] the battalion commander said ‘No.’ So we kept our mouths shut and did our job.” Though they did not see combat, James and his counterparts made it possible for Allied war planes to take off and counter the Axis powers in Europe. Their work certainly played an important role is achieving Allied victory.

In the same interview, which is now on display at the American Air Museum for visitors to watch, James indicated how he would like to be remembered: “Don’t call me white. Don’t call me Black. Call me James, American citizen.”

“We were treated royally.”

Evelyn Martin-Johnson was another American citizen who contributed to the war effort despite being discriminated against due to the color of her skin. She joined the Women’s Army Corps (WAC) in 1942. She was trained as a medical clerk but posted to Britain as a mail handler in the 6888th Central Postal Directory Battalion.

Composed of 855 enlisted women and their officers, the 6888th was the only all-Black and all-female battalion to be sent overseas in World War II. During her time in uniform, Evelyn experienced racism but explained, “We knew better than to do anything about that because we could get court-martialed. You have to remember, segregation was still in. Some of the Americans carried that segregation right over here.”

Evelyn’s job was to redirect a backlog of mail, some of which had been sent to the troops two years earlier and was still not delivered. The mail was stacked from floor to ceiling in a large warehouse. Clearing the backlog was estimated to take six months, but Evelyn’s company got the job done in just three months. Thanks to their efforts, soldiers could finaly connect with family members back home, boosting the service members’ morale while they fought to defend our freedom.

In addition to being happy to help get letters and packages to American troops, Evelyn appreciated being in England because she was viewed more as an equal and deserving of respect (although there were, of course, exceptions). Indeed, she reported, “We were treated royally” — she was even sent to London to take part in a parade before the Queen Mother.

Evelyn’s unit was also sent to France to sort mail before being shipped home in 1946. She went to college under the GI Bill, became a dental hygienist, and was later an active member of organizations providing help to veterans before passing away in 2015.

An Airmen's Acts of Service 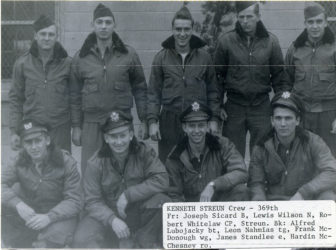 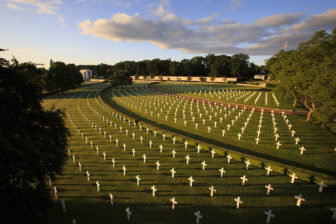 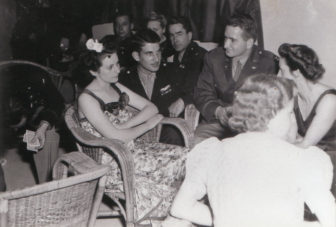