Every day, the American Air Museum tells the story of Anglo-American collaboration throughout the 20th and 21st centuries. In addition to showcasing stories of high-flying American airmen of every era, we are also proud to spotlight those less well-known instances of our two nations’ “special relationship.” Dedicated volunteer Anne Hughes has helped us to tell the stories of British pilots who learned to fly in the United States during World War II, and shares with us her fascinating research journey.

Back in 2015, I had come to the end of months of work going through the 8,000 microfiche slides containing de-classified records of Duxford’s 78th Fighter Group, to find stories for the newly re-designed American Air Museum. It was time to sit back with a cup of coffee for a few minutes, then Carl Warner arrived in the office with a book and asked if I would be interested in starting a new piece of research.

The book, containing photos and captions, was the No 5 British Flying Training School (BFTS) Anniversary book of 1942. Carl thought it could be a useful addition to the AAM archive, but we had little knowledge of the BFTS. Starting from a knowledge base of zero, interpreting the book’s photos and captions eventually revealed another facet of Anglo-American relationships which enhanced the many projects already in progress.

The book celebrated the first anniversary of the establishment of No 5 British Flying Training School at Riddle Field, Clewiston, Florida. Known as the Riddle-McKay Aero College, the school had been set up by the British and American governments in 1941 as part of the Lend-Lease Act, and enabled RAF trainees to learn to fly alongside American cadets away from the dangers of the skies in a country at war. Seven British Training Flying Schools were set up in America, in Texas, Oklahoma, California, Arizona and Florida. During World War II, thousands of RAF pilots were trained, most to return to Britain and re-join their squadrons. As well as celebrating 5 BFTS’ first anniversary in July 1942, the book includes over 60 autographs. My task was to find out the background to 5 BFTS and its founder, John Paul Riddle; to try and identify the original owner of the book; and to follow as many stories as possible for each autograph included.

My circuitous research led to various very useful websites and documents, and I was indebted to the online book RAF Wings over Florida by Will Largent which includes the history of the airfield and many first hand accounts of our autograph names. Further research led to the Embry-Riddle Institute and Aeronautical University, Clewiston Museum, Florida, and the archive section where digital copies of 5 BFTS’ in-house publication, FlyPaper, provided a real insight into everyday life at the base.

We decided to start recording the stories of the 5 BFTS group who had autographed our book, mostly Course 13, and set up a page on the AAM website with all the relevant information and biographies for individual airmen at Riddle Airfield.

At this point, I contacted the museum in Clewiston, which put me in touch with the 5 BFTS coordinator in the UK, Dr. Jenny Harding. Over many years, in memory of her father, George Hogarth, Jenny had attended ceremonies at Riddle Field in Clewiston and written regular informative newsletters for British veterans of 5 BFTS. As time passed, she included many obituaries, which were useful for our biographies, and also put me in contact with a veteran, Eric Denham. 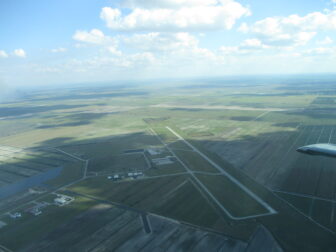 Jenny came to Duxford, and I was able to show her how we were proceeding with the website and introduced her to the American Air Museum’s curators. Following her visit and after a series of remarkable coincidences, in 2017 I found myself in Florida with an opportunity to fly into Riddle Field, now called Airglades Airport, where I was met by the curator and historian of the 5 BFTS museum and treated to a rummage through the archive, which gave more insight into the group. By this time, I felt a real connection, as names and stories were now familiar, and to see the airfield from the air proved a really moving experience, as was a time spent in the town and at the memorial.

Over the intervening years, I have continued to post more biographies on to the AAM website and have attempted to encourage the families of the veterans to record the stories of their 5 BFTS relatives with accompanying photographs, which they can submit for publication.

Seven years after the arrival of the 5 BFTS anniversary book on my Duxford desk, it is amazing to look back and see how this project has developed and brought another dimension to the American Air Museum, telling the first hand accounts of young British airmen who travelled over to America to train during World War II. We now have links with 4 BFTS, and both 4 and 5 BFTS pay regular tribute to IWM Duxford in their newsletters for including the biographies on the AAM website, and I have been privileged to be invited to share the story as a presentation to various groups.

We are grateful to our volunteers, like Anne, and all our supporters like you, who play a crucial role in helping the American Air Museum to achieve its aim of honoring American airmen.

A B-17 Navigator's Flight 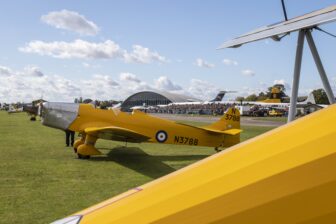 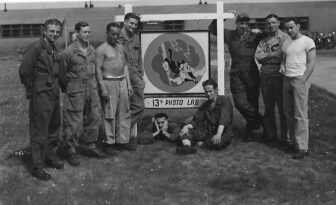